The adventures of my mom: Perugia

I will begin this by first telling you that I am back in the Tuscany! Woohoo!

I consider central Italy one of the most beautiful places on this planet, and I have been
to many places on this planet. Our trip today included both parts of Tuscany (very little)
and Umbria (it doesn’t get better than this). When you top it off with really good food
(local to the region), a son-in-law that knows the local area, a daughter who knows the history,
WOW, you have a great experience.

First, let me give you a little information about the area. In the area of both Tuscany and
Umbria (before the Romans) you had the “Etruscans”. The Etruscans are considered the first
major civilization in the area, with a language that has not been translated yet (later versions
of the language have been translated, but only because it has a Latin base)! Where did the
Etruscans originate from, no one knows. They were a loose confederation of cities with their
primary enemies being the Greeks and later the Romans. Most amazingly they have left behind a vast amount of art,  architecture, tombs, and language! Some of their structures are still being used today (how cool
is that) and I will show you pictures of them.

So, we left Florence driving to Chiusi, picked up Zia Rita (Aunt Rita), and drove to Citta della Pieve.
It is a medieval walled city, no great history that I am aware of, but I LOVE IT! It is beautiful,
has an awesome restaurant (Trattoria da Bruno Coppetta, with great food), and the ambiance you are
looking for when you want to experience the real Italy.

After we finished lunch we drove to Perugia, this was a jewel I was not expecting. We started by going
to the Town Hall (Palazzo dei Priori). This is definitely medieval and when we went
inside I honestly thought “I am in a flipping Harry Potter” movie and I have just walked into “Hogwarts”,
to include their emblem being a “Griffin”!!!!

The Palazzo dei Priori had 2 major parts to it. First, is the Sala dei Notari (1295), which is the
former “Lawyer Hall” and is guarded by a “Guelph Lion”, and a “Griffin”. Next, is the

Collegio del Cambio (1498-1500), which is the former “Money Exchange”. This is only the start of this wonderful town and this article will tell you of but a few of them. Included in my list are:

Etruscan Well – also still being used and built around the same time as the Etruscan Gate.

Walking – just walking around is an experience, full of beautiful side streets, narrow paths,

and covered walkways. I could spend days just walking amongst beautiful
colors, sounds, people, and smells of cooking!

However, what gave me the greatest pleasure was the city defense system, or fort, that you walked through (yes I said through, not on, but through) to get up to the top of the walled city! It was a completely covered walkway and contains a museum inside. For someone like me (Ihave a vivid imagination ), it was utterly fascinating. As I was walking down the walled road in my mind I could imagine Knights, Nobles, Peasants (with their carts), I felt is if I could feel those that had gone on before me! As we walked through these roads my daughter pointed out to me what are called “murder holes” in the ceiling. If attacked the defenders of the fort

would pour hot pitch or oil on the heads of the attackers. If you have ever been fascinated by a movie or story
of
times, you will love this walk (I was like a kid in a candy store, I couldn’t get enough)! To
finish this I would say if you do nothing else in Perugia, walk up through the walled city, it is a wonderful
experience!!! Stay tune for more ‘Adventures of my mom!’ 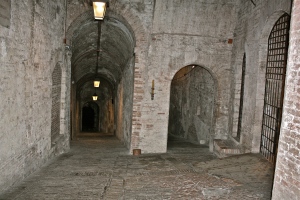